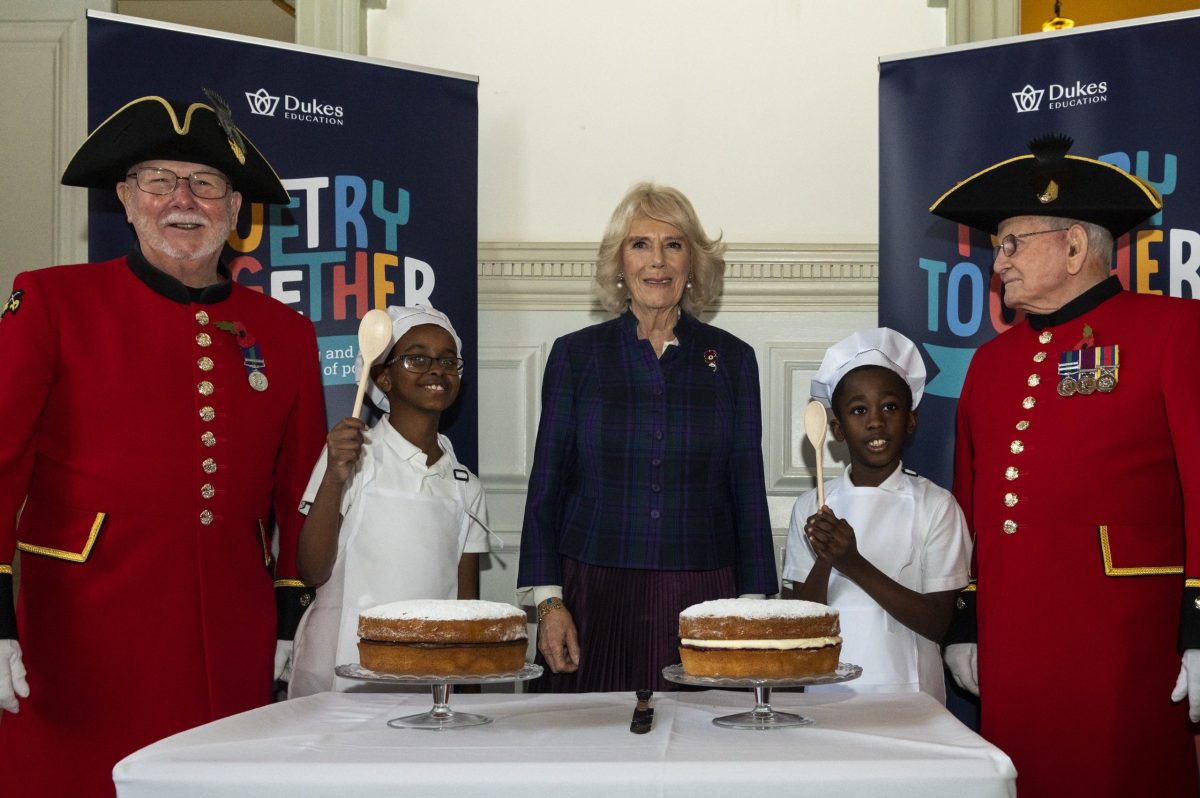 Celebrating the Power of Poetry

That’s it for Poetry Together 2021! Thank you so much to everyone who has been taken part. It’s
been a wonderful event with more than 400 schools from across the UK and around the world
getting involved this year. From Cardiff to Cumbria, London to Lothian and Suffolk to Solihull, there have been submissions and poetry parties taking place all over the UK and we’ve had fantastic international recitals from Nigeria, Shanghai, Hong Kong, America, Slovakia, Romania, Gran Canaria, Greece, Russia and United Arab Emirates.

School children, care home residents and Chelsea Pensioners celebrated the power of the spoken
word at a special Poetry Together tea party in London at the Royal Geographical Society (RGS). They were joined by Poetry Together founder, the writer and broadcaster Gyles Brandreth, and supporter HRH The Duchess of Cornwall, at the event organised by Dukes Education which has backed the initiative since it began in 2019. School pupils and elderly guests travelled from across the UK to the RGS in Kensington for some special poetry performances followed by tea and Victoria sponge cake made to HRH The Duchess of Cornwall’s very own recipe. There were two types of sponge on offer, one with a traditional jam and cream filling or the Duchess’s special version made with Nutella.
Five performances took place in the RGS’s Ondaatje Theatre, some were moving, some funny and all were brilliant. Pupils from St Vincent’s School in Liverpool stole the show – and many hearts – when visually-impaired pupils took to the stage to recite Colour of the Wind, some of them reading by
braille.

The five performances took place in the following order:

Whitehill Junior School , Hertfordshire, performed an original poem by local poet John Gohorry
Year 6 students were planning to perform with John Gohorry. In a tragic turn of events, he died just a fortnight ago. In his place, his daughter, Clare Bailey, a teacher at Whitehill, performed the poem her father had written alongside the pupils.

Roy Palmer, Chelsea Pensioner, performing The Worlds Future which he wrote himself
Roy took to the stage with fellow Chelsea Pensioner and friend Dewi Treharne to perform his own dramatic and timely poem about looking after the natural world.

St Vincent’s is a specialist residential school for pupils with sensory impairment in Liverpool. They performed alongside care home residents, with some pupils using braille to recite the poem.

Gyles Brandreth, writer, broadcaster, and founder of Poetry Together, said:
“This has been a wonderful event with young people and old people from across the country coming together for tea and cake and poetry.  We had children performing war poems about old soldiers,

We had old soldiers – Chelsea pensioners –  performing a poem about the future of the planet, we
had nonsense poems, old poems and new poems and a wonderful finale from a group of visually
impaired children, accompanied by their octogenarian supporters, that had everyone cheering with tears in their eyes.

Aatif Hassan, Chairman and Founder of Dukes Education, said: ‘What fun, joy and celebration of something which is extraordinarily important to all of us, which is poetry. It has been a wonderful opportunity for young and old to come together and recognise something that is so precious and has so much benefit to us and to society’
Poetry Together has been a huge success this year with more than 400 schools from across the UK and around the world getting involved this year. From Cardiff to Cumbria, London to Lothian and Suffolk to Solihull, there have been submissions and poetry parties taking place all over the UK and we’ve had fantastic international recitals from Nigeria, Shanghai, Hong Kong, America, Slovakia, Romania, Gran Canaria, Greece, Russia and United Arab Emirates. Poetry Together will be back in 2022 so watch this space to find out when you can register and take part at poetrytogether.com