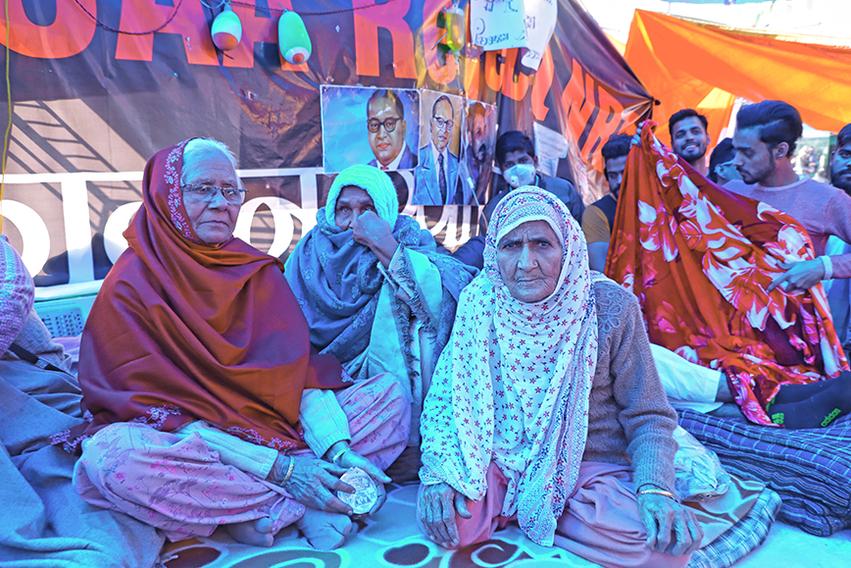 The right to have rights

Asma Khatun is 90 years old. She is Muslim and has lived in India all of her life (1). When the Constitution of India came into force in 1950, she and every other resident of the country, regardless of religion, became citizens of that country (2). The enactment of the Constitution is celebrated annually on Republic Day. This year, the 71st Republic Day, Asma emerged from a crowd of thousands who had congregated in Shaheen Bagh, a largely Muslim locality in New Dehli. She stood on a platform with the other “dabang dadis of Sheehan Bagh” (fearless grandmothers), and in a symbolic assertion of their identity, hoisted the Indian flag to ovations and renditions of the national anthem (3). Her purpose was to protest against India’s Citizenship (Amendment) Act 2019 (CAA). In doing so she was part of the unprecedented protests that have engulfed India since December 2019, when the CAA was passed. Mass demonstrations, unusually involving many women, have taken place throughout the land, on a scale exemplified by one of the events in Kerala, where seven million people formed a 620 kilometre long chain and took a mass oath to defend the Constitution against the “CAA’s attempt to destroy it” (4).

What is at stake for Asma and the other Muslims living in India?

“Citizenship is a man’s basic right for it is nothing less than the right to have rights. Remove this priceless possession and there remains a stateless person, disgraced and degraded in the eyes of his countrymen.” (5)

Chief Justice Earl Warren’s words warn of events all too familiar to the Rohingyas and Jews. Individuals who lack effective citizenship are amongst the world’s most vulnerable to human rights violations (6). With this forewarning we can begin to understand why Asma and so many of her fellow Indian Muslims have become protestors.

In 1955 the Indian government passed the Citizenship Act which extended citizenship from residents at the time of the adoption of the Constitution to any person born in India after its adoption, whether or not their parents were illegal immigrants (7). In subsequent years a strong anti-immigration movement gained political strength in India, particularly in Assam where it targeted the Bengali Muslim population (8). This led to the 1985 Assam Accord, by which the Indian Government agreed to establish a mechanism to identify and expel “foreign citizens” within Assam. In 2004, the 1955 Act was amended to remove the grant of citizenship by birth from 1 July 1987. It introduced the concept of “illegal immigrant”, categorising such a person as a foreigner and making them subject to deportation (9).

The CAA, promoted by the ruling right wing Hindu nationalist Bharatiya Janata Party (BJP), continues the erosion of citizenship. It treats Hindus, Sikhs, Buddhists, Jain, Parsis and Christians who illegally entered India before 31st December 2014 from Muslim-majority Pakistan, Bangladesh or Afghanistan as refugees fleeing persecution, and offers them a fast track to Indian citizenship (10). The same opportunity is not afforded to Muslims similarly affected, such as Shia or Ahmadiyya Muslims. Their status remains one of an illegal immigrant, unable to gain citizenship and subject to deportation.  The CAA violates the Constitutional principle of secularism and the articles of the Constitution which guarantee the right to equality and non-discriminatory treatment. The government’s anti-Muslim agenda will be operationalised by the CAA operating in conjunction with the plan to update the National Register of Citizens (NRC); a nationwide verification process aimed at identifying illegal immigrants. The outcome will see many Muslims stripped of their citizenship, vulnerable to statelessness and human rights violations (11).

How could this happen?  Inclusion in the NRC is based on the verification of documents proving an individual’s or descendant’s citizenship prior to 25 March 1971 – the date Bangladesh was formed. When the finalised NRC for Assam was released in August 2019, Human Rights Watch (HRW) reported the “process was marred by errors and bias” and, “also made unreasonable demands upon millions of people in Assam” (12).  Impoverished families and those affected by displacement and illiteracy could not provide “documentary evidence dating back over 50 years”. Women and girls were disproportionately affected, reflecting the fact that most women in India, historically and traditionally, have been excluded from entitlement to land, access to education and have almost no documentation to prove their existence as citizens (13). The only right of appeal against refusal of citizenship status was to “Foreigners Tribunals”, where the basic tenets of the rule of law were disregarded. The Tribunals were rife with bias, inconsistency, and error (14). Government documents accessed by activists show that nine out of ten cases were brought by Muslims and 90% of those were declared foreigners and subject to detention in one of the Government’s recently constructed mass detention camps (15).

The underlying purpose of the CAA is evident from political statements and the Government’s response to peaceful protest. Prominent politicians have called for the creation of a Hindu state and publicly referred to Muslims as “termites who should be thrown into the Bay of Bengal” (16). The revocation of the autonomy guaranteed to the Muslim-majority province of Jammu and Kashmir by the Constitution, relegating it to a territory ruled by New Dehli, was a powerful demonstration of intent reinforced by the deployment of Government troops, imposition of curfews, arbitrary detention of political opponents and the longest Internet shutdown imposed in history. Peaceful protest has been met with Government incited violence, unrestrained by the police and courts, and targeted at Muslims and their neighbourhoods (17). When the final NRC was announced in Assam on 31 August 2019, 1.9 million Assamese, both Hindu and Muslim were excluded. BJP legislator Dilip Paul stated that “BJP’s stand is that Hindus can never be foreigners.”(18)  The Home Minister asserted, “We will bring the Citizenship Bill which will ensure these people get Indian Citizenship” (19). Time to appeal against exclusion was extended to 31 December 2019 and the CAA was implemented only days before, providing a means of protecting non-Muslims who failed to establish citizenship in the NRC exercise and targeting Muslims for detention and deportation. HRW has reported that the CAA/NRC, “places millions of Muslims and other minorities at risk of statelessness and disenfranchisement” (20). The UN Secretary General expressed concern over religious minorities in India saying, “there was a risk of statelessness” (21). This is not an outcome that was unanticipated, as is clear from the Government’s instruction to set up detention centres all over the country and to hold those declared foreigners until their deportation (22). For Asma and other Indian Muslims, Justice Warren’s warning from 1958 has come to pass.

The CAA/NRC regime also exposes other vulnerable groups to the danger of statelessness. A particular challenge will face orphans or the many millions of children abandoned at birth in India (23), along with innocent children of illegal immigrants who have only known India as their homeland. The law does not contain measures to ensure that stateless children born in India acquire citizenship (24).

What then for Asma? Without help the answer to that question may be informed by history. Strong similarities can be identified in Myanmar’s 1982 Burma Citizenship Law, which combined with a nationwide citizenship scrutiny exercise similar to the NRC, resulted in Rohingya Muslims being stripped of their citizenship and rendered stateless. Full citizenship was primarily reserved for ‘national ethnic groups’ excluding the Rohingya (25). There were no measures ensuring stateless children born in Myanmar acquired citizenship and the onerous burden of proof made it incredibly difficult to secure citizenship. Once the Rohingya were no longer citizens of Myanmar, they faced abuse, restrictions on human rights, and targeted killings (26). India’s actions echo Myanmar’s, which resulted in a mass human exodus from Myanmar to neighbouring Bangladesh. Today stateless Rohingya refugees live in the Kutupalong, the world’s largest and renowned refugee camp situated at Cox’s Bazar Bangladesh (27).

History also shows that the “right to have rights” is not just a basic right, it is an aspect of humanity. When Asma and the other ‘dadis’ hoisted the flag to celebrate the Constitution and protest the CAA, they spoke for all those vulnerable in India who fear for their citizenship. They gave voice to the fears of the historically subjugated women and girls of India. They vented the anxieties of the elderly, who have lived in India for generations and, loudly declared the deep-seated injustice visited on the millions of orphans, abandoned children, poor, illiterate and displaced by the unreasonable demands of the NRC.  Fundamentally, they told the world that Muslims fear violation of their human rights from a ruthless and powerful government unchecked by the rule of law.

Asma represents all those who have lived in the shadows of society, but have now emerged to fight for the right to freedom, security, nationality and to be able to call a country home. Asma and others are for now citizens, but their fight to secure their rights, shows how important the status of “citizen” really is.