The evolution of vision is a process that has yielded staggering results: namely, the transformation of a simple photosensitive spot to an organ as complex as the ‘camera-type’ eye over less than half a million generations [1]. Today, vision remains as one of the most important senses in controlling an animal’s behaviour and thereby determining its survival. But in recent years, advancements in society have led to issues that pose a challenge to the vision of marine organisms in particular. We may have lost sight of what is truly important: protecting a biome with such a wide range of species and ensuring that the vision of these species doesn’t suffer. In doing so, we appreciate the functionality and intricacy of visual systems created through evolution of the eye over the years.

The watchmaker analogy has long been applied to the eye, most notably by William Paley in his book Natural Theology, to imply that for such an intricate creation to exist, there must exist a supernatural creator [2]. But as Darwin explains in On the Origin of Species, ‘if numerous gradations from a simple and imperfect eye to one complex and perfect can be shown to exist’, then it cannot be difficult to believe that such an eye can be formed by natural selection [3]. Ensuing research by Darwin and several other scientists has meant that we can now identify the stages in the evolution of vision. First came ‘eyespots’ in unicellular organisms like Euglena, which facilitated phototaxis, movement towards or away from a source of light [4]. Eventually this led to photosensitive cells forming a small indentation, which allowed organisms such as Planaria to identify the direction from which the light came; as the pit deepened the information became more precise. As the opening of this pit narrowed, the first ‘pinhole-camera’ eye developed: light enters through a small aperture and is focused onto the retina. Finally a cornea and lens formed to give the ‘camera-type’ eye that focuses light onto an even smaller area on the retina to produce higher-resolution images.

Today, out of 36 phyla only 7 have eyes, but these 7 account for approximately 96% of species in the world [5]. Why is vision so prevalent in the animal kingdom? For non-autotrophic organisms, the need for vision arises primarily from the need to find food. These organisms also need a way to avoid predation and identify potential mates. Out of all the senses that can be used to receive this information, vision is the longest in range and provides the most information in a certain amount of time [6]. Therefore for most animals, ‘light perception is both the trigger and the controlling sense for many, if not most, behaviours’, as published in an article in 2014 [7].

Through understanding the function of eyes in animals, scientists can now make conclusions about the behaviour of organisms solely by studying their eyes. This is most significant when studying deep-sea animals which are difficult to observe in their natural habitat and may not survive being brought to the surface for research: one such animal is the escolar, a deep-sea predatory fish. Research on the morphology of the escolar eye has shown that they have high sensitivity and slow vision, which suggests that the escolar may be a ‘sit-and-wait ambush predator’ [8].

Study of the eyes of marine animals is also becoming increasingly important for us to understand the evolutionary relationships between marine and terrestrial species. Lots of research has been conducted on the formation of limbs during the evolution of the first terrestrial vertebrates, but a research article published in 2017 suggests that it was actually a huge increase in visual range that led marine animals to move to the land [9]. Analysis of the scientists’ results shows a change favouring larger eye sockets would have happened before the arrival of vertebrates with complete limbs, with eyes tripling in size just before vertebrates began living on land. While this increase in size would have resulted in a negligible improvement in visual performance underwater, on land it provided a ‘large increase in performance’.

Further along in the evolutionary history of animals, when mammals returned to the oceans, their visual systems had to change again. Underwater, vision is far more difficult than above the surface: as depth increases, less light penetrates the water, and at all depths, light is more strongly scattered in water than in air. To function in the marine environment, the mammalian eye became more ‘fish-like’, and study of the aquatic mammal’s eye shows exactly how. The cornea, which in terrestrial mammals refracts light before it reaches the lens, plays an insignificant role in refraction, as the refractive index of the aquatic cornea (1.37) is very similar to that of salt water (1.33) [10]. To compensate for this, the lens is much more spherical and is responsible for focusing light onto the retina, while accommodation happens due to changes in intraocular pressure moving the lens back and forth rather than through the work of ciliary muscles.

It is clear that over time, evolution has selected for incredibly complex visual systems in marine and terrestrial organisms alike. This is despite the fact that the vision process requires huge amounts of energy provided in the form of ATP. The demand for ATP means that the retina is one of the highest oxygen-consuming tissues in the body; within the retina itself the layer of photoreceptor cells requires at least two times more oxygen than the rest [11,12]. Unfortunately, this means that hypoxia, or oxygen deficiency in a biotic environment, can compromise the visual systems of organisms by decreasing the photoreceptors cells’ sensitivity to light.

Hypoxia can affect the vision of any organism, but it has become a real concern for marine organisms over the past half century; this is due to the fact that global oceanic oxygen content has decreased by over 2% since 1960 [13]. A study has demonstrated ‘major retinal impairment’ in three species of marine invertebrates after they had been exposed to ‘surprisingly minor amounts of oxygen decline’, so this rate of ocean deoxygenation is alarming [14]. And while some organisms that already live in oxygen-deprived areas may have adaptations to maintain their sight, species that are less tolerant to reduced oxygen levels will be particularly at risk of visual impairment. In either case, decline in an organism’s visual function will lead to behavioural changes that may negatively impact their survival.

One of the two principal human causes for ocean deoxygenation is rising global temperatures. Increasing temperatures reduce the solubility of oxygen in water, which in turn reduces the concentration of dissolved oxygen in the ocean. This problem affects surface water disproportionately, with 50% of oxygen decline in the upper 1000m (the part of the ocean with the highest marine biodiversity) attributed to changes in solubility, but only 15% of total oceanic oxygen loss attributed to the same cause [15]. But this is not the sole problem caused by global warming: it also exacerbates stratification in oceans. Stratification is the process by which masses of water with different properties are layered with limited mixing. Stratification increases as surface ocean temperatures increase, but also as a result of increased freshwater discharge caused by glacial melting [15].

Another human cause for ocean deoxygenation is nutrient input into the oceans. Excess inputs of nitrogen and phosphorus lead to eutrophication, a process in which a surplus of nutrients in water results in dense plant and algal growth. These algal blooms prevent organisms below them from absorbing oxygen, so they die; the decomposition of these dead organisms uses up large amounts of oxygen, resulting in hypoxia. Increased nutrient inputs are a result of modern unsustainable intensive farming techniques which rely heavily on fertilisers and manure.

The threat ocean deoxygenation poses is severe and immediate. It is time to question whether our vision of a rapidly growing global economy is justification for degrading oceans to such an extent that the vision of marine organisms suffers. Solutions have been proposed to combat this problem: governments must urgently reduce carbon emissions which contribute to global warming, and industry must move away from the use of excess nutrients. From a individual perspective, we can also take matters into our own hands as a consumer and make small changes to our diet like reducing meat consumption, or choosing fuel-efficient ways to travel. There are several ways to limit and even reverse ocean deoxygenation; it is up to us whether we take responsibility now to protect the marine biome or leave it to future generations.

[3] Darwin, C. (1859). On the origin of species by means of natural selection, or preservation of favoured races in the struggle for life. London: John Murray 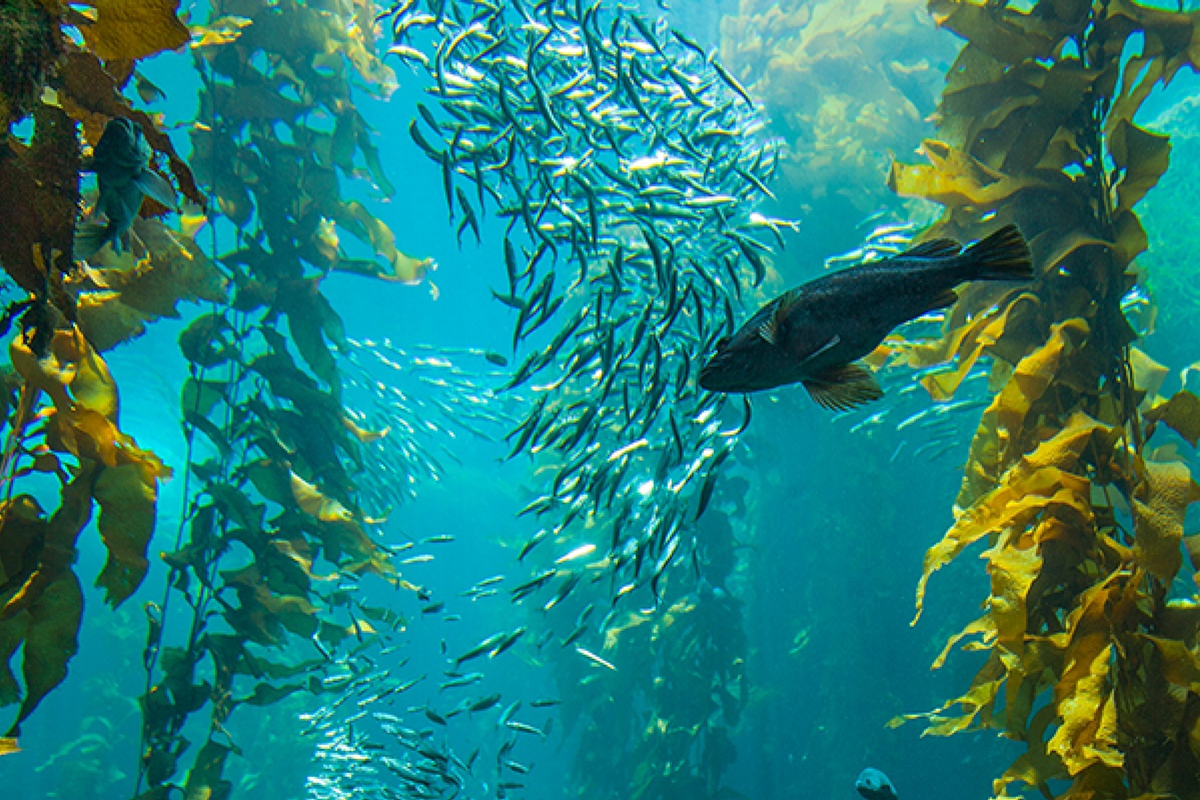 The threat ocean deoxygenation poses is severe and immediate. It is time to question whether our vision of a rapidly growing global economy is justification for degrading oceans to such an extent that the vision of marine organisms suffers.
We use cookies on our website to give you the most relevant experience by remembering your preferences and repeat visits. By clicking “Accept All”, you consent to the use of ALL the cookies. However, you may visit "Cookie Settings" to provide a controlled consent.
Cookie SettingsReject AllAccept
Manage consent