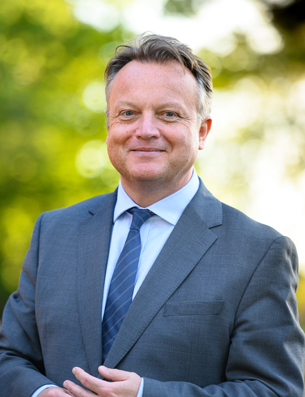 Tim founded Earlscliffe, now a Dukes college, in 2012, with his wife Julie. With 30 years’ experience in teaching and leading in well-known international schools in England, Tim is committed to providing an arena of academic stimulus, intellectual rigour, cultural enrichment, vigorous internationalism and, ultimately, personal success, in which students perform to their very best abilities.

After undergraduate studies in the USA and England, Tim started his career in international boarding schools in 1990 at St Clare’s, Oxford, gaining invaluable experience in the International Baccalaureate and in running wide-ranging summer courses. At 32, Tim became Headteacher at Buckswood, where he remained for over 12 years, seeing the school grow from 67 students to 420, with a buoyant sixth form offering a choice of university pathways which included A-level, Foundation and IB, and the establishment of a thriving football academy inspired by Nick Bollettieri’s tennis school in Bradenton, Florida. Tim oversaw a number of successful Ofsted inspections during this period and was involved in overseas projects in Nigeria and Georgia.

Tim established Sussex Summer Schools in 2001, which became a multi-centre provider of residential, junior summer programmes in the south-east for international students from over forty countries. Tim’s product development skills have been put to good use in this area, with the Mini-MBA™ for older teenagers proving itself year after year to be a highly-regarded and innovative course.

Tim is still involved in delivering A-level Politics workshops and university counselling. Tim enjoys maintaining successful working relationships with many highly-valued international partners, having embraced fully the concept of being ‘outward-facing’ across a school’s activities. Earlscliffe is a UNESCO Associated Schools Project member and has won a number of Erasmus grants in recent years for its lead role in student-centred projects with schools in France, Germany, Hungary and The Netherlands.

Tim has always endeavoured to be flexible, nimble and pro-active professionally, but always mindful of offering each student a highly-personalised experience.

Tim says that ‘Julie and I decided to join Dukes because it recognised that its strength was in each of its schools retaining its own unique identity, atmosphere, and ethos.’

In 2019, Tim became Managing Director at Dukes, responsible for our boarding schools. In this role, he guides collaboration, best practice, and performance at Key Stage 5 across the whole family.